Global Cost of a Car

The most and least affordable countries to run a car

Owning a car is by far the easiest and most convenient way to travel, you’re free to go anywhere at any time. However, it's becoming increasingly more expensive to own and run your vehicle. With prices for new vehicles increasing by 6.3% in the US since last year, more and more people are turning to affordable car subscriptions to help them get around.

But which are the best and worst places to buy and run a car? We’ve looked into fuel prices as a proportion of the average monthly wage, and which countries are spending the highest percentage of their average salary on these cars to find out.

Taking the top spot as the least affordable country is Mexico, with the North American nation scoring 9.70 out of 10. The country takes the top spot thanks to its high fuel costs, ranking first for the factor and it has the third highest cost of its most popular car, the Nissan Versa, compared to the average income too.

Up next is Estonia, with the baltic nation scoring 8.79 out of 10. The country ranks in the top ten for both the price of its most popular car, the Toyota RAV4 and its fuel price proportional to the average wage. However, Estonia earns its place as the second least affordable country for car ownership thanks to its car price as a proportion of its average income, taking the top spot for the factor.

Taking third place is the eastern European country Latvia. The country ranks in the top five for its car price as a proportion of annual income and the top ten for its proportional fuel prices too, giving it a score of 8.64 out of 10.

Luxembourg is the most affordable country for car ownership

The most affordable countries for car ownership

The tiny European country Luxembourg is the most affordable place overall to buy and operate its most popular car, the Volkswagen Golf, scoring just 0.46 out of 10. Luxembourg takes first place thanks to its high average wage pushing down the proportion of income needed to buy its most popular car, ranking third for the factor and it shares the top spot for fuel price as a proportion of income too.

The United States scores just 0.91 out of 10 making it the second most affordable country to own and operate its favorite vehicle, the Ford F-150. The US ranks high thanks to its very low proportional fuel prices, sharing the top spot for the factor. It also places in the top ten for car prices as a proportion of annual income.

Australia takes third place as the most affordable country for owning and running a car. Thanks to its relatively cheap fuel prices proportional to income, it shares second place for the factor, and its car price as a proportion of average salary ranks just outside of the top five too.

The countries with the least affordable cars

The Baltic nation of Estonia takes the top spot, with the country’s most popular car, the Toyota RAV4, costing citizens nearly an entire year’s salary of an average of $33,188. This is thanks to the shortage of new cars in the country and an inflation rate of 22.7% pushing up prices.

Taking second place is Israel with its most popular car, the Toyota Corolla, setting the average resident back by over 97% of their annual income of an average of $42,165. Despite having a relatively high average annual wage, the lack of competition between car importers in Israel has made prices skyrocket.

Next up is Mexico, which despite being one of the cheapest countries to buy a car overall takes third place when you compare it to the average salary of its citizens. Its most popular car, the Nissan Versa costs just under 96% of the average annual wage ($16,429), making it one of the most difficult countries to get your hands on a brand-new car. 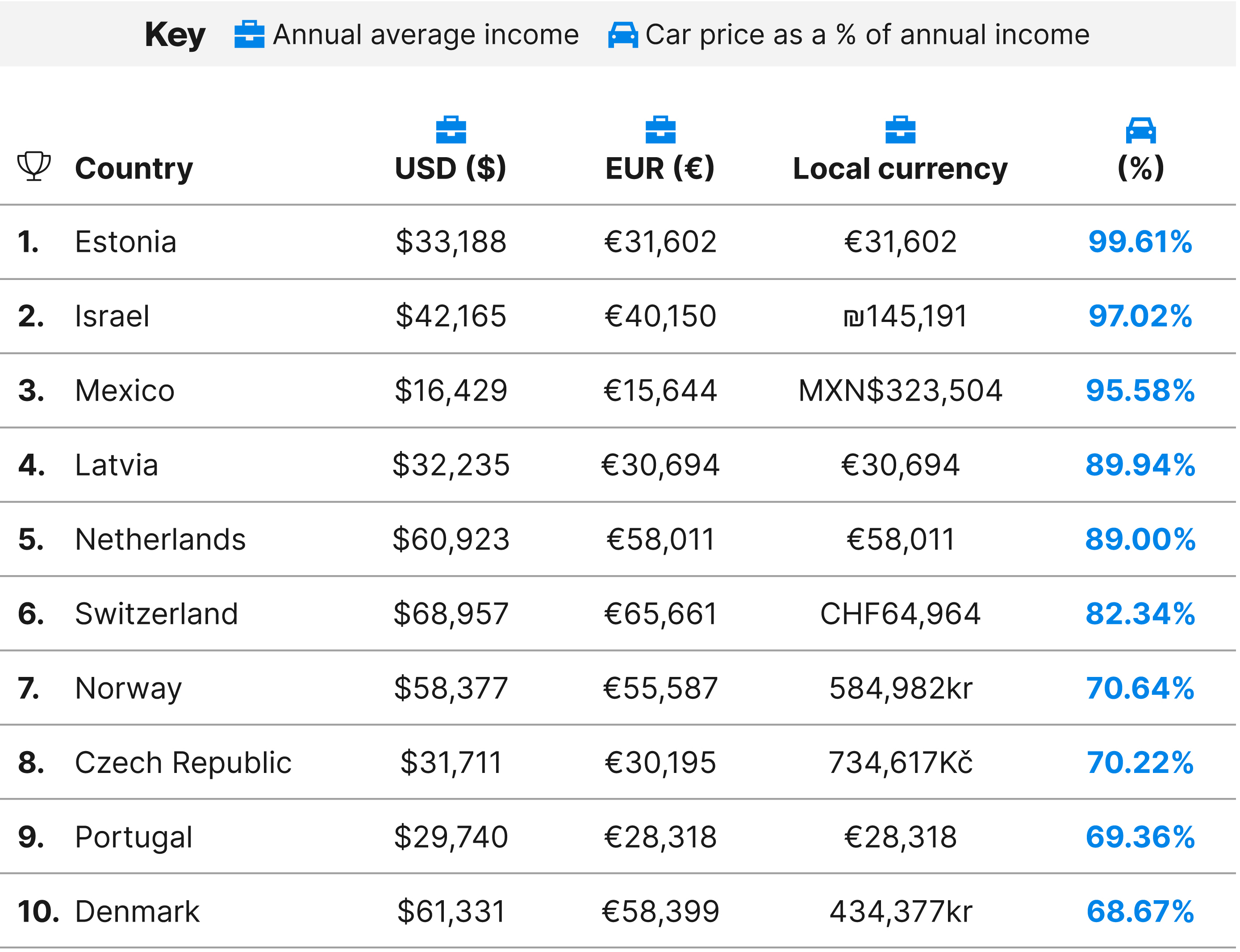 Japan is the country with the most affordable cars

The countries with the most affordable cars

Japan takes the top spot as the most affordable country to buy its favorite vehicle. The Honda N-Box only costs 26% of the average annual income or $10,462. These passenger cars are popular in Japan as they have cheaper tax and insurance costs due to their small size and very fuel-efficient engines.

In second place is France, with its citizens spending 36% of their average annual income on their most popular car, the Peugeot 208. The hatchback provides excellent mileage thanks to its fuel-efficient engine and cheap cost of repair thanks to an abundance of spare parts so it's no surprise it's the most popular car.

Up next is the tiny European nation of Luxembourg, with the Volkswagen Golf its most popular vehicle costing just 37% of the average annual income. Cars in Luxembourg are affordable thanks to the high average salary in the country. 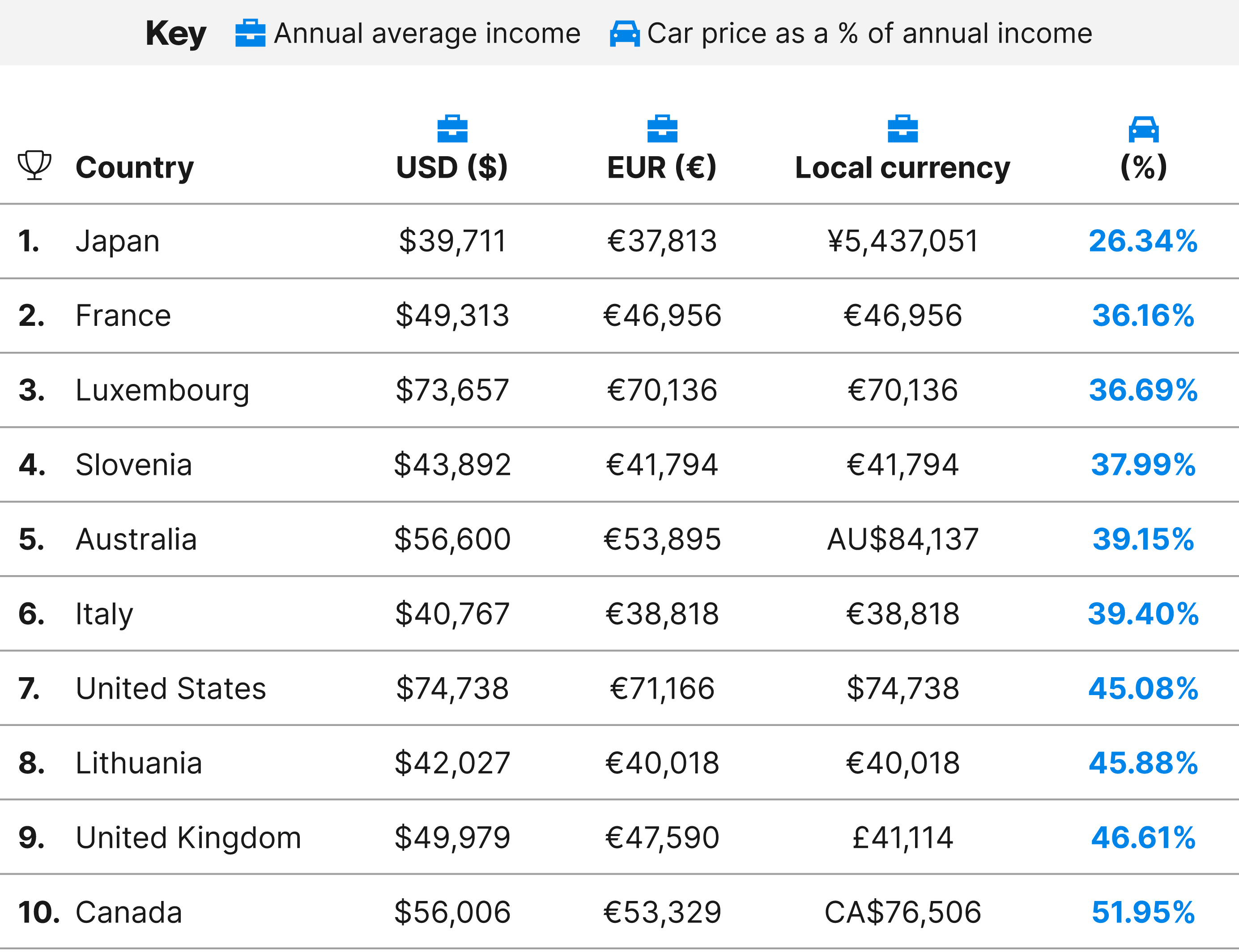 The countries with the least affordable fuel

Despite being one of the cheapest countries for fuel prices in real terms thanks to government subsidies and its booming oil industry, drivers in Mexico spend the highest proportion of their average monthly income on fuel. Per liter, fuel costs 0.22% of the average monthly wage.

Taking second place is Slovakia, with the average fuel price costing 0.15% of the average monthly income. The country has one of the lowest average incomes on the list, so it comes as no surprise it has one of the highest proportional prices.

Up next, Greece has some of the highest taxes placed on fuel in the EU, which can total up to 24% of the price. This means the price at the pump is pushed up to 0.14% of the average monthly income, taking it to third place. 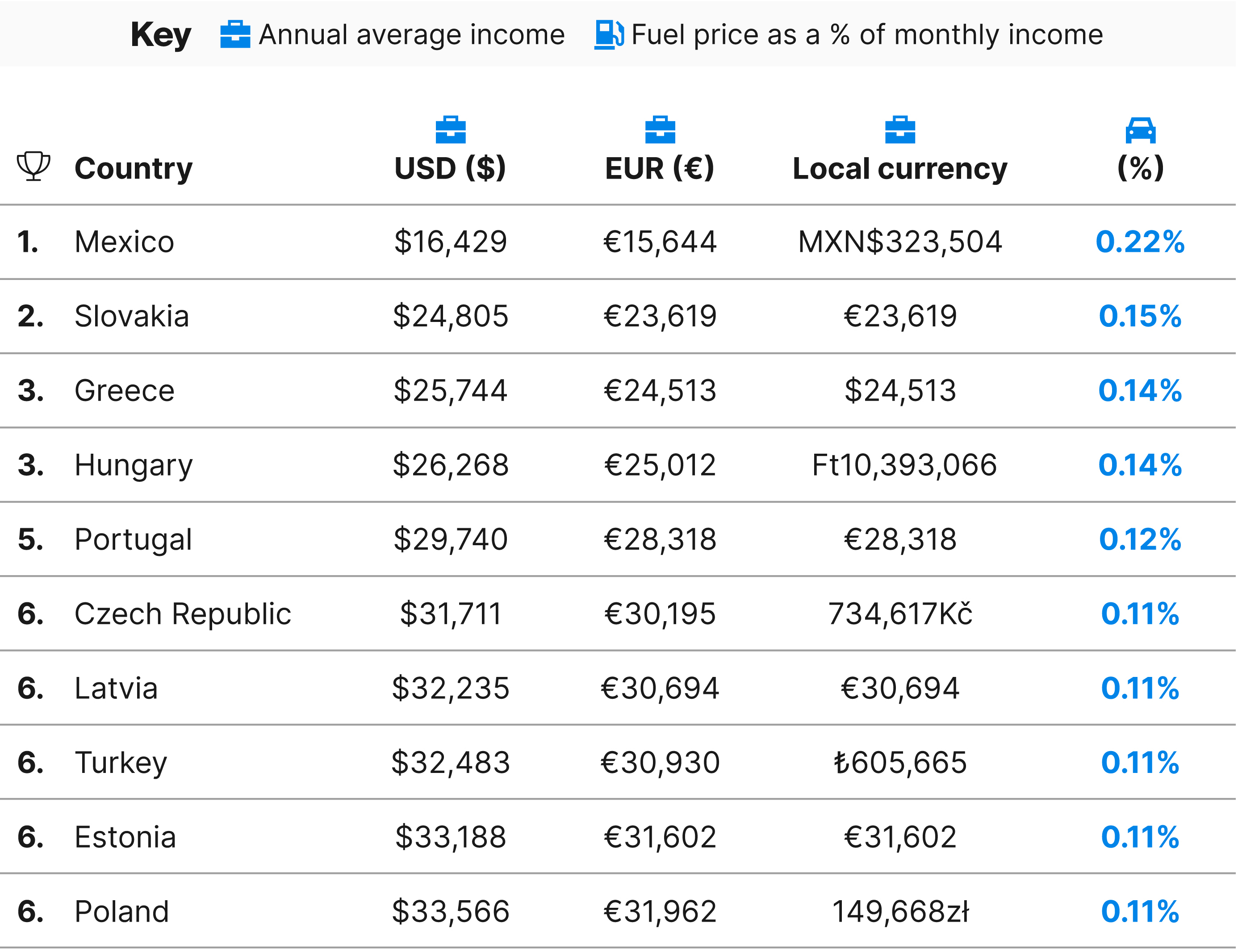 The countries with the most affordable fuel

Four countries share the top spot, with drivers spending only 0.05% of their average monthly income on fuel. Despite having wildly different fuel prices with the US having one of the cheapest and Iceland and Switzerland ranking second and third respectively, the countries have the highest average wages, lowering the proportional cost.

Four countries are up next with drivers in each of these Northern European nations paying 0.07% of their average monthly income for fuel. These countries also have comparatively high average wages, pushing down the proportional price of fuel and landing them all in third place for the factor. 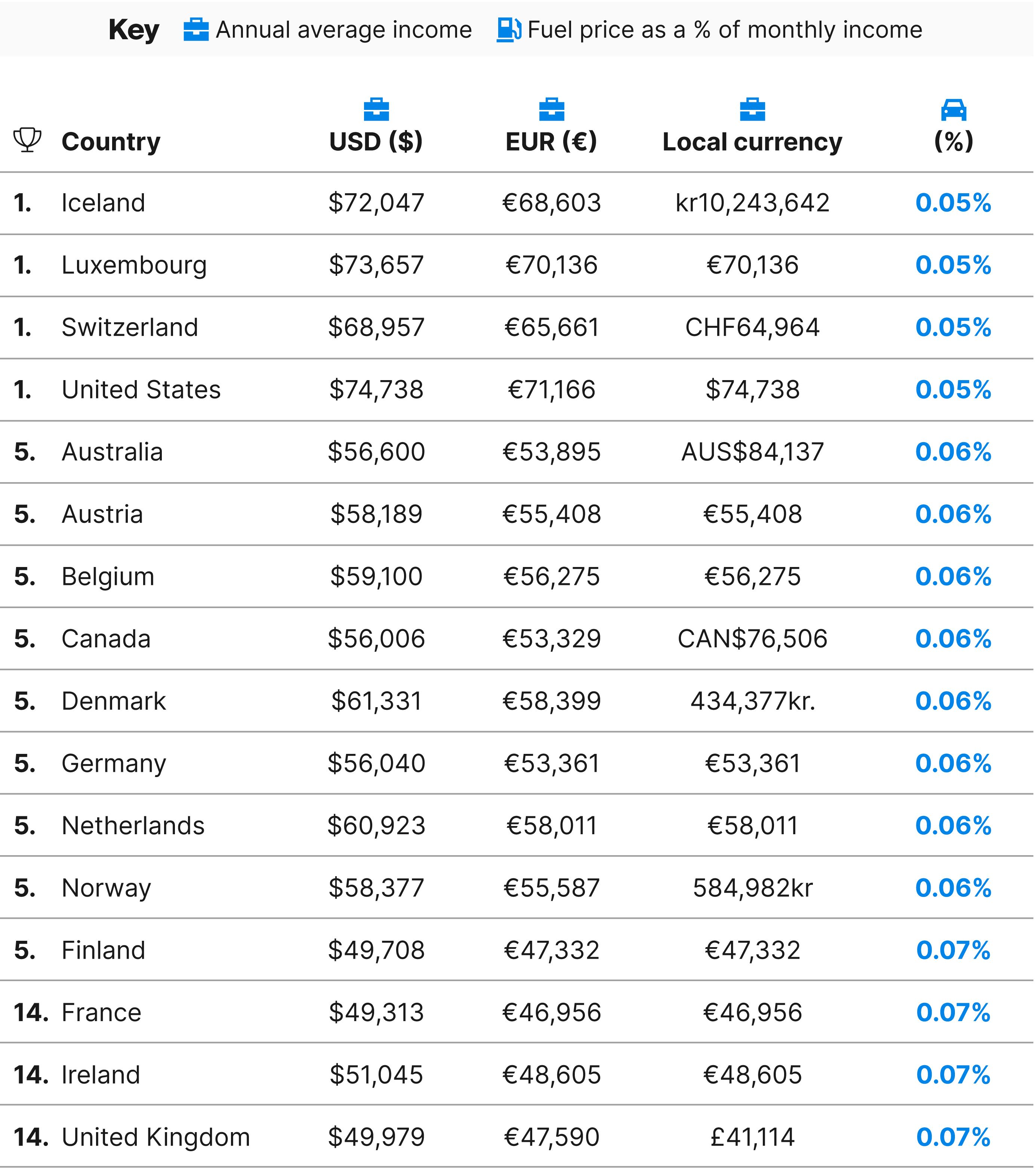 Beginning with a list of the most popular cars in each OECD country according to Amena, we analyzed each one on the following factors. We then gave each country a normalized score out of ten for each of the factors, before taking an average across each of these scores to reach our final overall score out of ten.

Car price as a percentage of annual income: The price of the most popular car in each country divided by the average wage according to The OECD.